The event was hosted by Eric Jorgensen, President and CEO of JX Enterprises, who owns and operates the dealership as well as 15 others throughout the Great Lakes region. 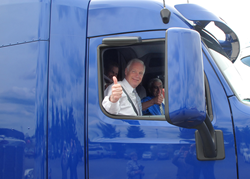 Jorgensen, who is also the American Truck Dealers Association Chair and Executive Director of the National Automobile dealers Association, said “We talked about the laws, rules and regulations that concern truck fleets and about fuel tax and the Federal Excise Tax. The 12-percent FET on heavy-duty trucks is already the highest percentage of any federal excise tax. We feel it would be unfair to raise this already burdensome tax even higher and that it would depress new truck sales and slow the deployment of cleaner, safer, more fuel efficient trucks into America’s trucking fleet. Senator Johnson listened attentively and offered supportive insights to our concerns.”

JX Enterprises General Manager, Herman Goth added, “Senator Johnson was very open and seemed to understand how important these issues are to our industry. We appreciate the Senator’s support.”

To conclude the visit, Jorgensen took the Senator for a ride in a brand new, state-of-the-art Model 579 Peterbilt.