The Wall Street Journal wrote an editorial about Ron’s lawsuit on Sunday.

“The White House claims Mr. Johnson lacks standing, but that’s because the lawyers don’t want to get near the merits. The real import of his lawsuit is that it invites the courts to restore the proper separation of powers amid executive encroachment.”

You can read the full article below.

Standing to Sue Obama
Congress should challenge his refusal to enforce the law.
Wall Street Journal Editorial
The legal left and media are always last to know, but there are the makings of a correction in how the courts police conflicts between the political branches. President Obama’s serial executive power abuses—on health care, immigration, marijuana and much else—may be inspiring a heathy rejoinder.

Under the Constitution, Congress is supposed to create and amend laws and the President to faithfully execute them, but Mr. Obama has grabbed inherent Article I powers by suspending or rewriting statutes he opposes. The President has usurped Congress with impunity because he assumes no one has the legal standing to challenge him. 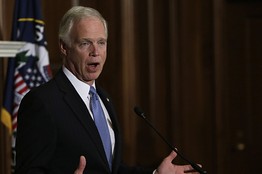 Most of the time people who are exempted from laws do not suffer the concrete injuries that the judiciary can redress, while the courts maintain a presumption that Members of Congress also lack such standing. In 1997’s Raines v. Byrd, the Supreme Court rejected a lawsuit against the line-item veto brought by six Congressmen because the loss of legislative power they challenged was a “wholly abstract and widely dispersed” injury.

But that doesn’t mean that conduct that marginalizes the legislative branch is absolved of judicial review. In one notable case, Wisconsin Senator Ron Johnson is suing the White House over the ObamaCare regulatory carve-out that conjured up special subsidies for Members and staffers who were supposed to give up federal employee health benefits to join the insurance exchanges.

Mr. Johnson argues that because Members must designate which staffers do and don’t participate, the rule imposes a nontrivial administrative burden—i.e., he has standing to sue because the rule harms his office, not because he is a U.S. Senator. More to the point, Mr. Johnson claims that the rule forces him to become personally complicit in law breaking and thus damages his political reputation. Several appeals court precedents hold that elected officials who must maintain the public trust suffer injuries when their credibility is undermined, including a 1993 D.C. Circuit ruling by now-Justice Ruth Bader Ginsburg.

The White House claims Mr. Johnson lacks standing, but that’s because the lawyers don’t want to get near the merits. The real import of his lawsuit is that it invites the courts to restore the proper separation of powers amid executive encroachment.

The Washington lawyer David Rivkin and Florida International University law professor Elizabeth Foley suggest a broader approach that doesn’t require legislators to act as individuals. They’re trying to persuade House leaders to mount an institutional challenge to the White House rewrite of ObamaCare’s employer mandate. Here the President is defying the plain language of laws and undermining legislative power. The courts ought to extend standing to the House as an institution to vindicate this injury. Short of impeachment, there is no other way for Congress to defend its constitutional prerogatives and the rule of law.

Earlier this year the Tenth Circuit used this theory to grant legislative standing to a group of liberal Colorado representatives to challenge that state’s taxpayer bill of rights. Last year the Supreme Court also granted standing to Congress’s Bipartisan Legal Advisory Group to defend the Defense of Marriage Act.

The White House had refused to advocate for DOMA based on a constitutional theory that then had no established judicial precedent. The Court ruled in Windsor that deliberately making the Defense of Marriage Act a legal orphan “poses grave challenges to the separation of powers for the Executive at a particular moment to be able to nullify Congress’s enactment solely on its own initiative and without any determination from the Court.”

All this recalls the revival of federalism under the William Rehnquist Supreme Court. From the New Deal to the late 20th century there were few tangible protections of the powers the Constitution reserves to the states or the people, and any doctrine that limited federal incursion was assumed a dead letter.

But beginning with the 1992 landmark New York v. United States, the Court began to rediscover the government of enumerated powers that the framers envisioned. A 6-3 majority overturned a 1985 federal law that ordered states to dispose of radioactive waste within their own borders because “the accountability of both state and federal officials is diminished.”

The ballot box is the most important constitutional check on government, but voters can’t know whom to reward or punish if Congress impresses states into federal service. Political actors must “suffer the consequences,” Justice Sandra Day O’Connor held inN.Y. v. U.S., if their decisions turn out to be “detrimental or unpopular. But where the federal government directs the states to regulate, it may be state officials who will bear the brunt of public disapproval, while the federal officials who devised the regulatory program may remain insulated from the electoral ramifications of their decision.”

This jurisprudence turned on the “vertical” separation of federal and state power. Mr. Obama’s suspension adventures pose precisely the same questions about the “horizontal” division of powers, and the same logic applies. If the executive branch is allowed to rewrite or suspend statutes, it is harder and in some cases impossible for voters to know which parties and spheres of the government to hold responsible. Political accountability is undermined.

The legal establishment will dismiss Messrs. Johnson and Rivkin as cranks with no hope of success, but it has been wrong before. The President thinks he can disregard the laws, but judges are paid to defend them.

Want to show your support for the lawsuit?  Sign our petition to join the 75,000 other Americans who have joined us!